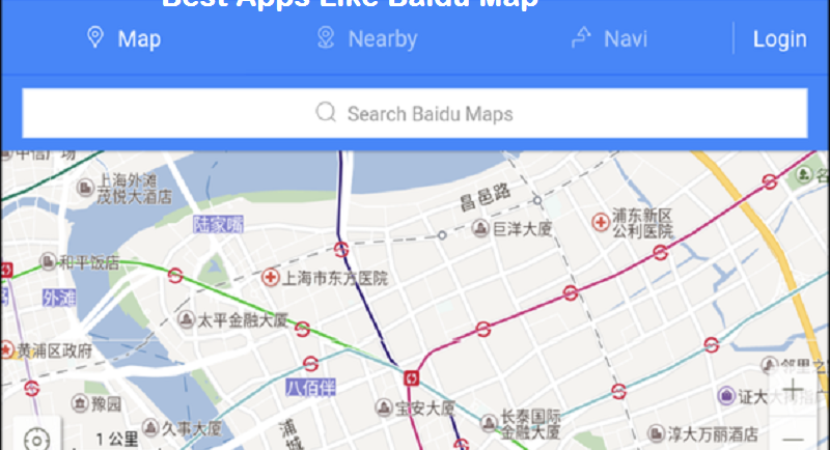 The sudden banned imposed by the Indian government on the 59 Chinese apps have disrupted the users of the country. Out of all the banned apps, Baidu Map was one of them. The said the app was used by millions of users in the country. Now that Baidu Map is banned in India, users are looking for non-Chinese alternatives to the app, preferably the ones made in India.

The decision of banning these 59 Chinese apps was taken due to the rising conflicts between the two countries. Chinese apps like Baidu Map, TikTok, and others have been banned as they pose a great threat to the security and privacy of the country. All these apps have been said to collect user data in an unauthorised manner and transmit them outside the country. To protect the privacy of 130 crore Indian users, the government has taken this decision.

If you were a Baidu Map user, no worries because we have got some of the best alternatives for you. In this post, we will suggest you the best and most popular non-Chinese apps like Baidu Map.

Baidu Maps is just like Google Maps. It is a mobile and desktop web mapping service offered by Baidu. The app provides you street maps, satellite imagery, street view, and indoor view perspectives. It also functions as a route planner for traveling by car, foot, or public transportation.

The mobile version of the app was supported by both ios and Android platforms. originally, Baidu maps were only meant for China as the app was available only in the Chinese language and had maps only of Hong Kong, Taiwan, China, and Macau. But now Baidu Maps spread its service to various other countries. Currently, it is known to offer its services to over 150 countries in the world.

The app makes use of map data that are supplied by MapKing, NavInfo, Here, OpenStreetMap, and LocalKing. The app has more than 348 million users all across the world. But recently, the app is banned in India which means the company can no longer serve in the country. This brings us to the point where we have to look for the best Baidu Map alternatives. Check out the next section for details.

If you are not sure what non-Chinese app to use as Baidu Map alternative, no worries, because we have got an entire list ready for you. The apps listed below are just like Baidu Map. Some of them are even better than Baidu Map. All these apps are available for free and can be downloaded from the app store.

When it comes to web mapping services, Google Maps have to be on the top. This is not just the best but also the most popular mapping service out there. It is used by millions of people all across the world.

Google Maps provides a reliable mapping service. With the help of this app, you can navigate to any new place in the country or abroad. It gives you real-time GPS navigation along with smart updates and traffic info. The app is backed by Google Assistant which makes it easier for you to use the app. You can use Google’s assistant to ask directions from the app while driving.

The next best alternative, we have is Here WeGo. This app was created by Nokia. Although Nokia may not be a topmost company anymore, the mapping service offered by them is pretty good.

They provide a great navigation and mapping service that can work even without an internet connection. This is one of the unique features that you will not find in any other mapping service. So if you are looking for the best Baidu Map alternative, then you can go for this app.

You can find the app on both android and ios platforms. The app can be downloaded for free from your mobile app store. Since you can use it without an internet connection makes it a very convenient option. The app also has many useful features like traffic alerts, road accidents alerts that generate alternative routes, and real-time ETAs.

As you may have guessed it right, Apple Maps is exclusively available for Apple users. In other words, it is available only on the ios platform. This app is also the de-facto choice for iOS devices. So if you are an Apple user who used Baidu Maps, you can now shift to using Apple Maps.

The Apple Maps provide you detailed maps, accurate turn-by-turn navigation, immersive 3D experiences, and custom route planning. It is designed to give you enhanced user experience. With this app, you can easily find your way to your destination.

The app also has details on indoor areas, such as airports and shopping malls. The Apple Maps started supporting turn-by-turn navigation for India since the starting of last year. The developers at Apple are constantly trying to make the app better.

Waze is yet another mapping service that is available for both ios and android users. This app is known to give you accurate information on your location. It can also help you to navigate better and faster.

If you are not satisfied with the other alternatives mentioned above, then you can download this app on your smartphone. The main highlight of the app is that provides active crowd-sourcing traffic information. From police stops to road accidents and even gas prices, you can every bit of information from this app.

Waze makes navigation easy and comfortable. It gives you tons of benefits and it is way better than Baidu Map. All you have to do is go to your mobile application store and download it.

Lastly, we have TomTom Navigation. Many of you may have heard about it before. This is one of the GPS navigation services available. Just like the other mapping services, you can use it on both ios and android devices.

The company already has accurate maps for the entire world and this includes even India. It is because of this reason that Huawei has entered into a partnership with them as they need a complete replacement for Google Maps.

When you visit the App store, you will find this mapping service as TomTom GO Navigation. But on the Play Store, it is available as TomTom GPS Navigation.

As a responsible citizen of India, we should respect the decision taken by the government. We all need to do our part for the well-being of our country. This can be started with the replacement of these apps. Instead of looking for different ways to use Baidu Maps on your phone, you should try out the other alternatives mentioned in the list. Hopefully, we will have more such alternatives available in the coming days.

Why are Baidu Maps banned in India?

Baidu Maps is one of the 59 apps that is banned by the Indian government recently. The app is said to collect user data illegally and transmit them to networks located outside the country. To keep user data safe and within the country, the government has taken this strict decision.

What are the alternatives you can use in the place of Baidu Maps?

You will find many alternatives to Baidu Maps, so you have nothing to worry about. You can use Google Maps, Waze, and TomTom Navigation instead of Baidu Maps. These are non-Chinese apps and are loaded with features that a driver would want. Most importantly, these apps are available for free and can be downloaded from your mobile application store.

Google Maps is one of the most reliable mapping service available out there. It is used by people all across the world. It gives you accurate directions and other traffic-related information. Other than that it also helps you to find reviews for a place to eat. The app also can predict traffic delays. In short, Google Maps is loaded with features that you will love.

Can Apple Maps be used by android users?

No, Apple Maps is available only for Apple users. Unless you have an iPhone or iPad, you cannot use this mapping service. For android users, they can use Google Maps which is one of the best mapping services in the world. It gives you accurate information and loads of useful features.

Is there any mapping service that can work without an internet connection?

You can use the Here WeGo mapping service by Nokia. This is perhaps the only mapping service that can work even without an internet connection. This proves to be useful in situations when your network conks off.