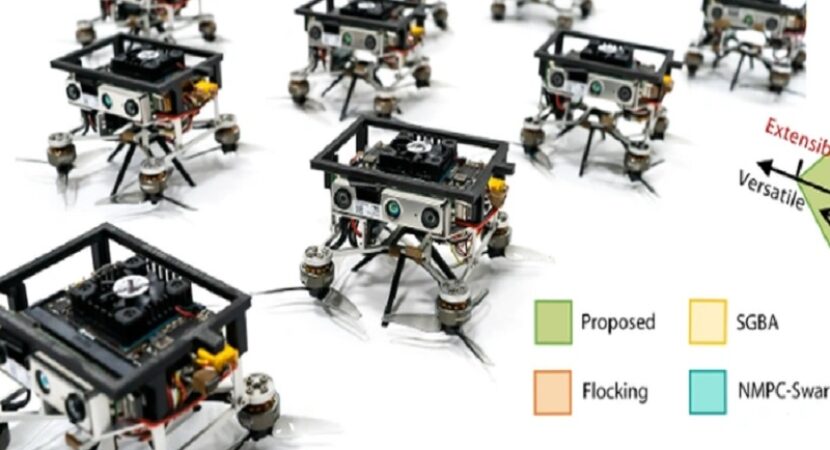 A new scientific research paper has been published this week featuring a drone swarm of micro flying robots capable of tracking humans and flying through dense forests with ease. Check out the video below to see the drones swarm as it navigates a dense bamboo forest and tracks a human from every angle even with obstructions.

Many science-fiction films have presented swarms of drones being used for a wide variety of different things from exploring unknown alien ships, to surrounding spaceships as a shield. Featuring drones capable of navigating and coordinating their flight path autonomously. Now Science Fiction is becoming reality thanks to researchers and scientists based in China’s Zhejiang University.

“Aerial robots are widely deployed, but highly cluttered environments such as dense forests remain inaccessible to drones and even more so to swarms of drones. In these scenarios, previously unknown surroundings and narrow corridors combined with requirements of swarm coordination can create challenges. To enable swarm navigation in the wild, we develop miniature but fully autonomous drones with a trajectory planner that can function in a timely and accurate manner based on limited information from onboard sensors. “

“A high-quality trajectory thus can be obtained after exhaustively exploiting the solution space within only a few milliseconds, even in the most constrained environment. The planner is finally integrated into the developed palm-sized swarm platform with onboard perception, localization, and control. Benchmark comparisons validate the superior performance of the planner in trajectory quality and computing time. Various real-world field experiments demonstrate the extensibility of our system. Our approach evolves aerial robotics in three aspects: capability of cluttered environment navigation, extensibility to diverse task requirements, and coordination as a swarm without external facilities.”