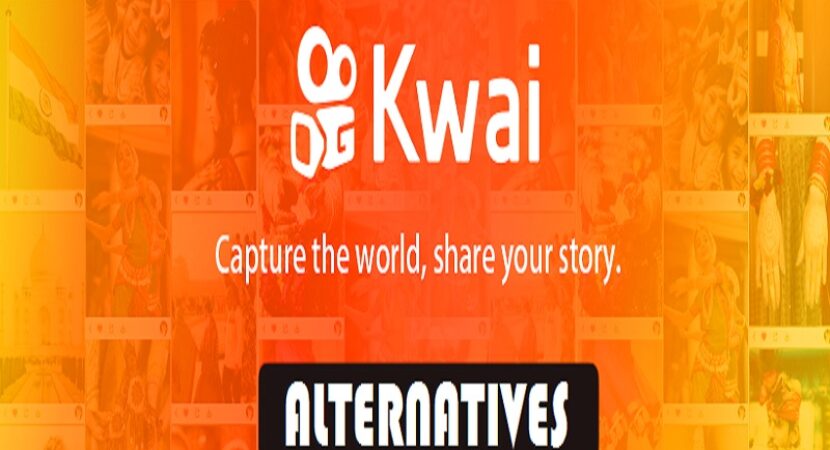 Sitting bored at home? Right now everyone is on the internet looking for things to watch. But that seems to be getting boring too. After all, how much can you watch sitting in one place? Soon you will feel the urge to create as well. That is exactly what Kwai helps people do. With this app, they can create short videos and share them with friends and even on other platforms. But even though quarantine is still ongoing, the Kwai app isn’t available anymore. The Indian government has decided to ban the app owing to privacy complications and user data protection concerns. But now the need has arisen to look for other non-Chinese alternatives to Kwai so that we can continue to entertain ourselves and others

Kwai fully stands for Kuaishou. It’s a Chinese application that was developed by Beijing Kuaishou Technology Co. Ltd. At its height was at the second spot among the video-sharing apps used in the country. Kwai enables its users to share short videos as well as live streams. Here’s why it was so popular:

Why Was Kwai Banned?

Kwai was getting more than a hundred million daily users in the year 2013 and this was followed up by a whopping 50% increase within the next 6 years. The app is this popular because it is not only free but it’s also available in multiple languages like English, Japanese, Hindi, Southern Korean, Malayalam, and many more. But recently, it was a part of the 59 applications that was banned by the Indian Government. It was banned because the government determined that it wasn’t protecting user data well and in turn creating a risk. So to safeguard the interest of its citizens the app was banned.

Now that the app has been banned it’s time to look for some alternatives to Kwai which will help create the content as well the community. Here are some Kwai alternatives which you can use:

With Mobcrush you can play games and share it wherever you like. You can live stream to YouTube, FB, twitch, and more. This app will let you live stream whatever mobile game you want. It can be anything from Fortnite to Pokemon Go. The only condition is that your device must be android 5.0+. The app is free and easy to use. Although it has a “Go Live and Get Paid” feature that will allow you to get revenue, but for now that’s just for US users. You can also create a community and chat with others. Hang out with them no matter which platform they are watching. Apart from this, you will be able to participate in live events, tournaments, contests, and such as well.

This app will allow you to stream videos to various video sites. This non-Chinese alternative to Kwai is cloud-based and easy to use. You will be able to capture videos and stream them easily since the entire streaming process will take place through the cloud servers of the company. There will be no need to get additional CPUs or opt for bandwidth requirements. You can use this app on all prime operating systems like Mac OS, Linux, and Windows. The app is integrated fully with 35 different streaming platforms based in the UK, US, China, Russia, India, Japan, and even more. You will be able to stream to any unsupported RTMP-enabled platform as well. But to get this you will have to pay for it. Also, know that apart from this you will be able to chat with the audience across different platforms and analyze your video performance according to audience engagement.

Coub app will let you create video loops right from Camera, YouTube, GIF, and more. You will be able to make GIFs, but with sound as well. Moreover, you will also be able to add the audio you love from YouTube videos or your phone’s library. Don’t worry about quality, all videos will be in HD. You can make your videos horizontally, vertically, widescreen, or on any format that you love. You can subscribe to other channels and collect those coubs up in your pocket by using the Recoub-button. You can share your recoubs with others on various social media platforms as well.

If you want your short videos to look amazing and movie quality then uses MoviePro. This app will help you create some of the most powerful and elegant video recordings. This app comes with a customizable frame-rate, still recording, pause-resume, direct camera roll revising, image flip options, 4K resolutions, and a whole lot more. You will also enjoy 3D touch, video stabilization, trigger recording, audiometer, different modes, uncompressed audio-options, and more.

This video editing free app will let you make your pictures and recordings special right in your smartphone. You will be able to decide if you want to record one from the app or if want to go forward to the next montage making stage by using the already present recordings and photographs with you. The app offers a lot of tools like gluing recordings, diverse moves, and more. There is a video proofreader that will let you accomplish something unexpected. You will be able to share your end edit on various social media platforms. Know that this is just a video editing app, there is no community where you can make friends or subscribe to other channels here.

This app is loved and used by millions. You will be able to make funny real-time videos and clips using this. The app lets its users add quotes, sounds, multiple kinds of music, and more to the videos. So basically you can edit the videos however you want. If you live creativity then the features here will let you get a free reign with your creativity. You can choose from their large music library as well as quotes from iconic characters from movies and TV both. Also, you can watch amazing dubsmash videos by various users in the community. There are also a lot of trends and challenges which are held. This includes games involving television dialogues, comedy, movie themes, and more. Once you are done, you can share it on other platforms.

Triller lets you make videos that look professional in just minutes. You will be able to make such videos thanks to the hundreds of filters and effects like texts, emojis, and texts. That’s not all. You will be able to collaborate with the other users on site. Know that some of the top artists also make use of this app. It is very easy to operate as well. Make use of trending-tracks to edit the videos as well. Once you are done you can share it on social media platforms like Instagram, Facebook, Twitter, and such. You can make videos on the fly as well. Want to lip-sync? You can do that too. There are a lot of challenge videos that will test your creativity and skills on the go.

This app will let you add text to the videos, time control, motion control, and more. You will be able to add audio from the gallery itself or even choose one from the existing soundtracks. The features are unique and they have plenty of it. You can watch the trending videos right from the app itself. The videos are of different genres like fashion, comedy, sports, travel, art, and such. So you will find something that you like. You can share your creation on other platforms like Facebook, WhatsApp, Instagram, and such. You can add in the relevant hashtags, title, and such as well.

Roposo is a literal firework of an app. Like Kwai, it will let you create short videos that pack a punch since you will be able to edit it to look professional. With this, you can showcase your creativity and give hour audience an amazing story. There are speed-controlling and time-lapse features here. You will be able to engage with a community and see videos from various other creators. There are a lot of genres you can choose from so you can watch the videos you like. To make things easier, the interface is easy to use. You will be able to share it on various social media platforms with all the necessary tags as well as the right channels.

Noizz will let you make the kind of videos you like by making use of the existing templates. But if you don’t like that and would much rather express your creativity, then you can do that too. You can customize your feed here to watch just the content you like. To help you edit your videos, this app offers a lot of filters, stickers, and music features. There are also ten thousand magic-effects. Once done, you can share it on other platforms as well.

How long will this ban last?

Right now it’s impossible to answer that. It might be taken off next month or it can remain banned forever. It’s important to remember that this app as well as the 58 others were banned because they were found to be guilty of data mining by the Government. As such user security as at risk. So it’s unlikely that they will be brought back anytime soon.

Will you have to uninstall the already installed app from your phone?

It’s better if you do it since once maintenance and updates stop, it will be just a husk. You won’t be able to connect to the app through the internet as well since all net providers are being asked to cut off data channels to these banned apps. But it’s not just the uselessness of the apps once the ban takes full effect. You will find that there is a security risk as well once you stop receiving security updates for the app.

How can you install alternative apps?

Just go to Google play store. There you will find all of these apps. Moreover, you can check various reviews as well before downloading and installing them.

Are these apps secure?

These apps haven’t been banned by the government and neither any security complaints have arisen as well till now. So you can indeed use these without any worries.

Will you have to pay for the alternative apps?

All of the Kwai alternative non-Chinese apps mentioned here are free to download. You don’t have to pay for that. But do know that once you have it downloaded and are using it,then you might have to pay for some upgraded services and features if you do want to use them.