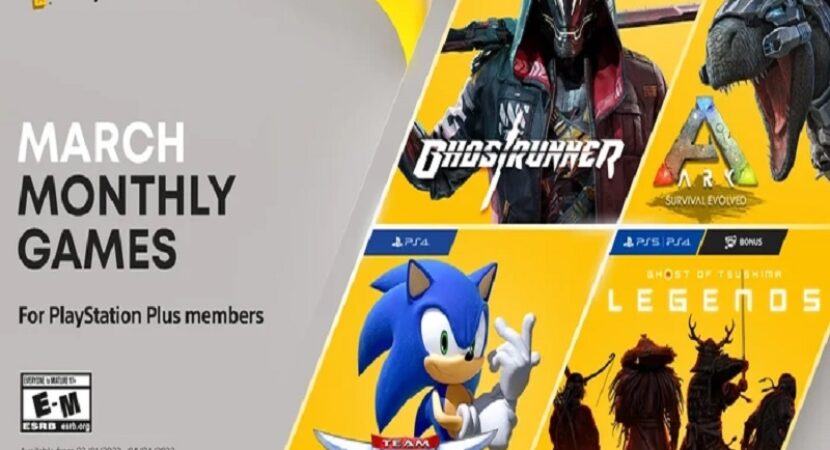 Sony has today confirmed the PlayStation Plus games that will be made available during March 2022. Next month’s lineup include Ark: Survival Evolved, Team Sonic Racing, Ghostrunner and more.

Played from 1/3 person perspective players must establish a camp with fire and craft weapons and gear to help them survive in the hostile environment.

The March PlayStation Plus lineup will test your survival, racing and combat skills in equal measure. Prove you’ve got what it takes to survive a deadly island wilderness in Ark: Survival Evolved, outpace the competition in Team Sonic Racing and sharpen your reflexes in cyberpunk first-person adventure Ghostrunner. And in addition to those titles, team up and take on fearsome, supernatural foes in bonus game Ghost of Tsushima: Legends*, which joins the lineup this month.

In this multiplayer first person survival game, you awake freezing and starving on a mysterious island. Hunt, harvest, craft items, grow crops, and build shelters to survive. Use cunning and resources to kill or tame and ride the Dinosaurs and primeval creatures roaming the land, and team up with hundreds of other players to survive, dominate… and escape!

The speeding ‘hog switches sneakers for wheels in this thrilling, competitive style arcade racer. Face-off with friends in intense multiplayer racing***, race together across stunning worlds and work together as a team by sharing power-ups and speed boosts. Pick one of the Sonic franchise’s iconic faces, who have been split across three distinct character types, then unlock game changing vehicle customization options to suit your racing style.

For more information on all the PlayStation Plus games for March 2022 jump over to the official PlayStation blog by following the link below.