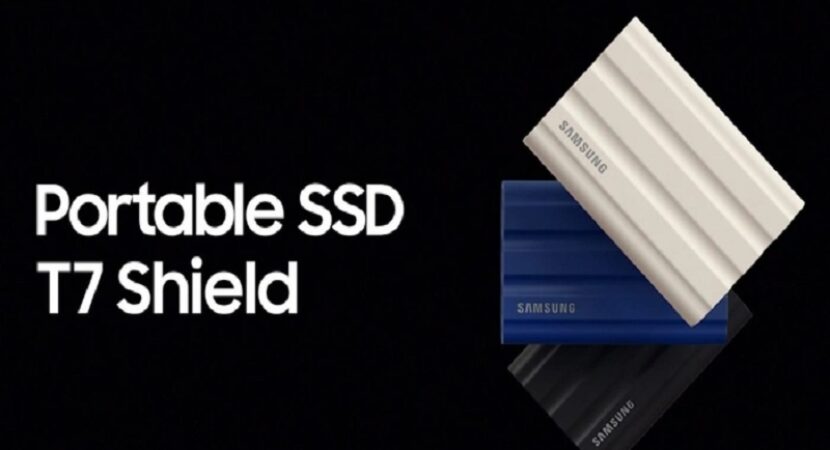 Samsung has launched a new portable SSD this week in the form of the pocket-sized rugged T7 Shield. Resistant to shock and drops up to 3 m as well as being dustproof and water resistant to IP65 certification the small external SSD ways Jess 98 g and offers a read speed of 1,050 megabytes per second (MB/s) and a write speed of 1,000 MB/s.

The T7 Shield SSD is also equipped with strengthened security thanks to 256-bit AES, Advanced Encryption Standard with hardware encryption.

The T7 Shield portable SSD is now available to purchase worldwide and is available in capacities of 1 or 2 TB in beige, black and blue finishes. The SSD drive is supplied with a USB Type-C-to-C cable and a USB Type-C-to-A cable, and includes a three-year limited warranty and costs $160 for the 1TB and $290 for the 2TB.

As performance degradation and overheating that can occur often when transferring large files, Samsung has optimized the inside and outside of T7 Shield to address these concerns, including incorporating innovations to the surface material and enhancements to software.

As a result, there is no performance degradation even when files of 2TB are moved at once, and heat generation is minimized. With the T7 Shield, it is possible to transmit data stably without performance drop7, even when performing data-heavy, continuous tasks such as high-quality video recording, editing, encoding and rendering. This alleviates concerns over inconsistent drive performance.

It is approximately twice as fast as its predecessor, the T5, and up to 9.5 times faster than external hard disk drives (HDDs)6, saving consumers, digital creators and professionals valuable time.”

Designed to work across multiple devices, Samsung’s T7 Shield can store large numbers of pictures, games as well as 4K and 8K videos whether on a PC, Mac, Smartphone (Android), or game console. Plus, it provides access to Samsung’s Magician Software, which lets users to conveniently manage the drive.